Given the brexit vote, falling pound and a reasonable bank balance, the whole family got new computers this year for Christmas. A Lenovo M700 MT desktop for myself, a HP laptop for my son and a Lenovo Yoga 510 for my daughter.

(I was rather surprised doing my initial research to discover that desktop computers now cost more than a laptop of equivalent spec - even though the latter also includes a battery and a screen.) 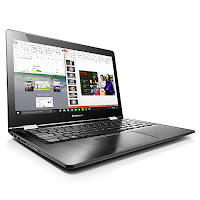 So we bought her computer from John Lewis.

Unlike my desktop which came with MSWindows 7, shrinking the C drive in Windows 10 actually worked! Getting into the UEFI setup to change the boot order was a bit harder though - no messages at startup to advice what key press would open the setup or allow the boot order to be changed.F1, F2, escape and F12 during boot had no effect.

The only option was to select restart from a running MSWindows session while holding down the left shift button. This rather enforced the option of dual boot - but with a 1Tb disk, there was plenty of room to spare.

I was rather surprised to discover that although I could get into the UEFI setup, the keyboard was completely unresponsive. Plugging in an external keyboard solved that problem. Boot order changed and I was ready to go.

Running from the USB stick was a bit ropey, but these problems went away when I installed to the hard disk. Everything is working apart from the touch screen. That's quite a big omission, but as relatively new hardware running with a very new display system (Fedora 25 uses Wayland rather than Xorg) it may take a while to get it sorted - meanwhile I'll let my daughter play around.

Even without the touchscreen stuff, this wee device is a viable proposition as a laptop - there are a lot of devices available at this price point, but this is notable in feeling very sturdy.
Posted by Colin McKinnon at 17:25 1 comment: Links to this post

Having blogged about keyboards twice before, you may have got the impression I'm slightly obsessive. I am.

While my old PC was merely getting a bit past its sell-by-date, the keyboard I was using was horrible - a really nasty HiPoint silicone bump device purchased as a temporary measure until I could do some proper research.

As before I had started with what I thought was a reasonable set of requirements:
But it proved remarkably difficult to find anything even coming close to this bill. From much trudging around shops, I was able to identify that Cherry MX red's seemed to provide the right feel (albeit with rather a lot of travel needed). Even just reducing the list down to Cherry MX red / compact / UK layout, I could not find anything online. It seemed the only option I had to meet these requirements was to get a keyboard built to order by a specialist at a cost in the region of £150+ and even then, finding a tenkeyless offering was proving difficult.

Instead, I decided to take a gamble on a keyboard found on eBay - a Bakker Elkhuizen 840. 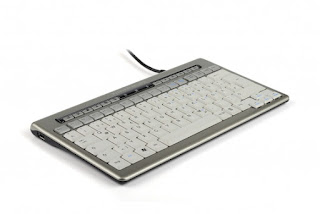 This has scissor keys rather than Cherry MXs, but has (IMHO) a really nice action. The keys are:
It feels solid and well-built. And, as a bonus, is a USB hub with 2 connectors.

Posted by Colin McKinnon at 17:02 3 comments: Links to this post


In the past I've been rather impressed with the robustness of high-end PCs - I had a dual Pentium II HP Kayak XM600 for many years before I passed it on my mother for an extended tour of duty. Apart from the RD-RAM which never came down in price while the cost of DDR tumbled. Add to that the fact that running the X Window system, I wasn't going to see a lot of benefit from a fancy graphics card, I really wanted to get the fastest CPU I could. I did consider getting a retired server - but they are typically horrendously noisy. Then I thought about a used HP Z400. But looking at the behaviour of my current system, while the CPU was frequently maxed out,  it was usually with just one or 2 processes causing all the pain. Having 8-16 CPUs wasn't going to help unless they were a lot faster than what I already had.

The device itself is not as substantial as the PCs I've owned before - and despite the tower case, there is limited scope for expansion. Adding a couple of hard disks is about the limit. There are 2 DDR4 slots (one occuppied with a 4GB module), 3 PCI Express connectors (2 very small, and one small - I'm not familiar with the technology). The blanking plate behid one of PCIe connectors is filled with an external SATA connector (which could be moved elsewhere to make the slot usable). But apart from an SSD and possibly more RAM later I'm not looking at add a lot more hardware to this machine.

The handle at the front/top is not particularly sturdy, but adequate for occassionally lugging the device about.

Powered up, it seems remarkably quiet compared both to the HP Pavillion its replacing and the HP i5 generic corporate device I use at work.

Accessing the BIOS (sorry UEFI setup) was easy - just F1 at boot. The default configuration came with Windows 7 and Secure boot disabled. As I'm doing a lot more MSWindows dev and admin stuff these days, I decided to keep it as dual boot. Shrinking the C drive in MSWindows proved to be a complete PITA - even after disabling swap, updates and rollbacks, it still wouldn't release more than around 10Gb due to "unmoveable" files. And having to use the horrible tools with MSWindows was just too painful - so I booted up with a Mint install disk and had no problem shrinking the drive down to 100Gb.

Installing Mint 18.1 from a DVD I had prepared earlier was a no-brainer. I created the same users on the new machine as existed on the old, rsynched /home and everything worked - but a lot faster!

The onboard ethernet works with the RTL8168g driver. Its a 500Gb Western Digital HD. This feels a little slower than the 2 x Seagate 250Gb disks in the old machine (configured as OS+Backup and home+var+data+swap rather than in any RAID setup). But the planned SSD upgrade should fix that.

If only the laptop had been this easy! (details coming in a later post).
Posted by Colin McKinnon at 16:37 No comments: Links to this post