Well, after some digging around I've gone with PCLinuxOS. Flightgear and Google Chrome are available on this. It's significantly faster than Fedora, even though I've switched back to a 32 bit OS (from x86_64). I'd previously installed PCLinuxOS on my daughter's laptop and been impressed with the results. 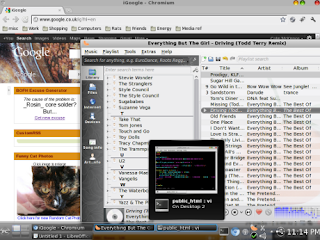 I've gone with larger fonts (must be getting older) than I had befoe - which combined with the bright colours of KDE makes it a bit cutesy - especially with the MacOS type window decorations.

Kmail still uses Akonadi - but unlike on Fedora, it's not using a mysql backend - and its not maxing out one the CPUs. Still has quite a big footprint - but again no apparent way to switch it off.

I fired up Thunderbird and added the ExportImportTools extension. This still does not support Maildirs - but it was simple to export my mailboxes from kmail and import tham in Thunderbird. The latter integrates rather well with KDE, but it is a bit ugly (unfortunately there are very few themes currently available for v11).

BTW for anyone else wanting to export a mailbox file from kmail...although there are some scripts out there on the internet to do this, if you've got a running kmail installation, all you need to do is select the emails, right click and 'save as...' to export a mailbox format file.

So I'll continue looking for an email client which supports multiple identities / SMTP and POP servers, is lighweight and not ugly. I suspect I'm going to have to wait for a nice Thunderbird theme. I suppose I could write one.....no, I've got enough half-baked projects for the time being.
Posted by Colin McKinnon at 23:16